The origin of the Greyhound is deeply rooted in ancient history. In fact, murals and paintings of dogs strikingly similar to today’s Greyhound exist from over 4,000 years ago. From the beginning, the Greyhound was held in high regard in the Middle East and throughout Europe.

A Day in the Life of a Racing Greyhound

Racing Greyhounds have a busy race-day routine. They only race three times in two weeks, so race day is very exciting.

Wake-up is early in the kennels. The trainer and his or her helpers are usually there by 6:00 AM. Most of the greyhounds get some exercise, including sprints, to keep them in top condition. However, the greyhounds racing that evening are not exercised with their kennel mates. They follow a lighter schedule, usually consisting of a brisk walk to warm them up and a rubdown.

Breakfast is now served. The greyhounds racing later in the evening are given half of their daily food, and receive the rest of their meal when they get home from the track at the end of the night. A racing greyhound eats between 2,000 and 4,000 calories a day! Now there's time for a nap before leaving for the track.

When the air-conditioned truck arrives at a greyhound racing park, all dogs are weighed in. The kennels set the racing weight of each greyhound. Each must weigh within one-and-a-half pounds of their racing weight or they are scratched from the race. Once they weigh in, the dogs go into the paddock kennel to wait for their race.

Pre-Race Warm up and Veterinary Check 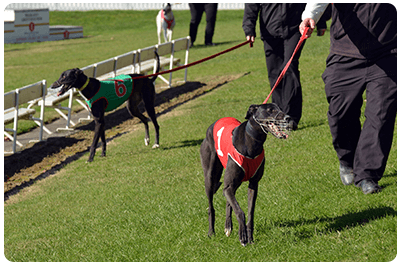 Now the veterinary assistants collect a urine sample from each greyhound. They have a long stick with a cup on the end to make this process a little easier.

Each state's Department of Racing keeps the urine samples until the end of the race, then checks the winning greyhound and two or three others at random for illegal drugs. No foreign substances are allowed; not even an aspirin!

Each greyhound park has an on-site veterinarian during all races. Before each race, the vet checks each greyhound to make sure it is healthy and fit to run. The veterinarian will scratch a greyhound from the race if he/she feels the dog should not run. The Paddock Judge checks the tattoos, and looks for the other distinguishing features that identify each greyhound in the race.

One last muzzle and blanket check is now performed to be sure they are both on securely. The greyhounds are introduced to the wagering public using a video camera in the paddock. Each greyhound is introduced by name, race weight, kennel and trainer.

Pre-Race Parade for the Racing Fans

Now the greyhounds head out to the track. They are paraded in front of the racing fans so they may get a closer look if they wish.

And the Race Begins!

At post time they are loaded into the starting boxes, the mechanical lure starts up, and they're off!

The lead-outs collect the racers at the end of the race and lead them back to the paddock area. Their legs are sprayed with a hose to cool them down. On very warm nights they take a refreshing dip in the wading pool. The greyhounds are ready for a drink of water and after a short walk, they settle down in their air-conditioned kennel trucks for a nap while their kennel mates finish racing.

TRIP IN THE AIR CONDITIONED TRUCKS BACK TO THE KENNEL

When everyone is done for the day, they head home to their kennel, eat dinner and turn in for the night. Tomorrow they'll get some light exercise and a well-earned visit to the whirlpool to relax their strong muscles.

How old are retired greyhounds?

How old are retired greyhounds?

Greyhounds are usually between two and five years of age when they are retired. With proper care, they can be expected to live 10-12 years of age.

How big are greyhounds?

How big are greyhounds?

What should I expect if I adopt a Greyhound?

What should I expect if I adopt a Greyhound?

Because Greyhounds have never been in a house before, EVERYTHING is new. Therefore, expect them to be somewhat confused and very curious. House manners will need to be learned. Greyhounds are very intelligent dogs and learn quickly. A retired racer will need to be shown what glass windows and doors are. They will also need to learn how to go up and down stairs. You should expect a period of adjustment. Not all Greyhounds adjust as fast as others. For example, some Greyhounds may be more difficult to housebreak. Others may have a tendency to chew and some may be extremely shy. A lot of patience, love and understanding is needed through this adjustment period.

Does my Greyhound need a special space in the house?

Does my Greyhound need a special space in the house?

Racing greyhounds have never lived in a home environment. While in the racing kennel each greyhound has its own private kennel that provides them with a feeling of security. For this reason, your dog's crate will be a source of security for them while they adjust to your home. After a transition period, your Greyhound will be right at home and will no longer require the crate. Beyond this transition period, Greyhounds are no different than other house dogs.

Will my adopted Greyhound require housebreaking?

Will my adopted Greyhound require housebreaking?

Greyhounds are kennel-trained. This means that they are trained not to soil their crate. At first, you will need to take your dog outside frequently while it learns to adapt to a regular housebreaking schedule. Within a short period of time your dog will be housebroken. However, nothing is perfect, and you should expect a few accidents along the way.

How much exercise do Greyhounds need?

How much exercise do Greyhounds need?

During their racing career, Greyhounds are accustomed to racing every three days. As Greyhounds get older, their exercise requirements diminish. Basically, the younger the dog, the more exercise it will require. An occasional walk, plus an opportunity to run off-lead in a fenced-in area once or twice a week is usually enough exercise for most Greyhounds. A fenced-in yard will typically take care of your Greyhound's exercise requirements.

How much do Greyhounds eat?

How much do Greyhounds eat?

When racing, Greyhounds are fed a high-energy diet. Once they are retired, they need to be fed a good quality dry food such as Pro Plan, Science Diet, Iams or Nutro; all of which are available at pet stores. You will want to avoid foods that contain artificial coloring, because Greyhounds tend to have sensitive digestive systems.

Can I Take My Greyhound to a Bark Park?

Can I Take My Greyhound to a Bark Park?

One of the greatest joys of owning a Greyhound is watching him run at top speed. However, finding an appropriate fenced-in area can be difficult. Several dog parks, specifically those in Broadripple and Eagle Creek, have opened up in the past few years creating a seemingly perfect setting for letting your greyhound run. However, these parks are not suitable for Greyhounds.

Greyhounds were bred to be sight-hound hunters. The 4000+ years of heredity far outpace the months of training at the track. A small dog at a dog park offers the perfect lure for your sweet pet. You cannot trust your greyhound to stay by your side and he will most likely chase such a dog, especially if other dogs are joining in and a yelp or squeal ensues.

At best, you leave the wrong impression of the breed to those at the park who see your "vicious greyhound" tormenting a helpless small dog. At worst, your Greyhound could kill someone's beloved pet. We have heard numerous reports from friends at the parks who relay these accounts to us. As a result, GPA Indy does not encourage this and has the position that greyhounds should not participate in these unmanaged free-for-alls.

Don't think that a muzzle is the solution. A muzzle might not help the little dog in need and will certainly put your dog at a disadvantage or in peril with other large breed dogs that are not muzzled. Most importantly, that's not the message or image we want to portray of the breed.

Please find an appropriate public fenced in ball field or friend out in the country with a fenced in yard. Get together with some other greyhound owners, muzzle your dogs, and have some fun. Please, avoid the dog parks for everyone's sake.

Why do Greyhounds wear muzzles?

Why do Greyhounds wear muzzles?

Greyhounds wear muzzles for two reasons. When they are racing it helps to determine the outcome of a race in a photo finish. It also protects them from injuring themselves or other dogs.

What type of medical care do Greyhounds require?

What type of medical care do Greyhounds require?

Like any other dog, Greyhounds require annual vaccinations. They also require annual checks for heartworm and other parasites. You will want to verify that your veterinarian is fully informed about Greyhounds as a breed, since they require special care when anesthesia is administered.

Greyhounds are sensitive to many chemicals used in flea-control products. Be sure that you only use those products that are known to be safe to a Greyhound. NEVER use a flea collar.

Greyhounds are not susceptible to conformation diseases such as hip displasia. A healthy Greyhound can be expected to live ten to twelve years.

Why can't Greyhounds be staked on a dog chain?

Why can't Greyhounds be staked on a dog chain?

Greyhounds are sight hounds and will chase most anything that catches their eye. This could result in injury or death. NEVER tie your Greyhound to a stake, clothesline-type run or any stationary object.

Why are Greyhounds required to be kept on a leash unless in a fenced-in area?

Why are Greyhounds required to be kept on a leash unless in a fenced-in area?

Greyhounds love to run and can do so at speeds in excess of 40 miles per hour. They instinctively love to chase things, especially rabbits and squirrels. In their quest for speed, a Greyhound can quickly become injured or lost. Since they have lived in kennels all of their lives, they are not "street wise" and have no fear of traffic. 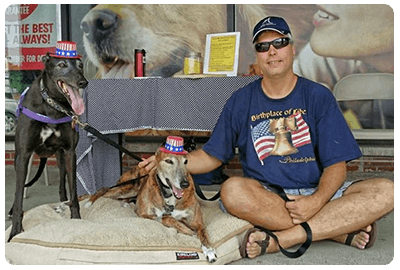 Enjoy a "Meet & Greet" with greyhounds and their owners at one of the many event held on a monthly basis in the Greater Indianapolis and Bloomington area.

Click here to view our events calendar and view the next scheduled Meet & Greet in your area. 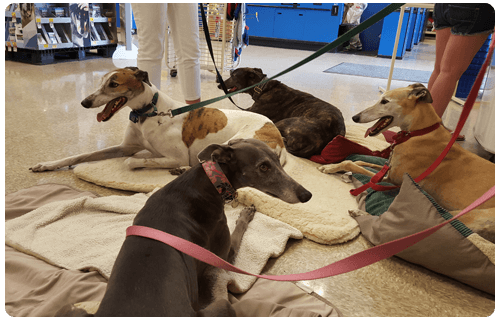 Adopting a greyhound is serious commitment. GPA Indianapolis encourages you to do all you can prior to the adoption to ensure that you are making the right decision. Provided below are some excellent books that can help prepare you for greyhound and dog ownership.

If you're preparing to adopt a greyhound your local GPA Indianapolis representative will ask you if you have had the chance to read any of these books, so be prepared! Should you decide to purchase your books from Amazon.com, please use the links from this page. Proceeds from the sales will go directly to GPA Indianapolis and help us place more greyhounds. 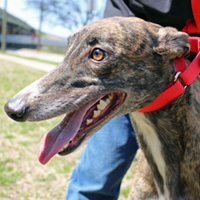 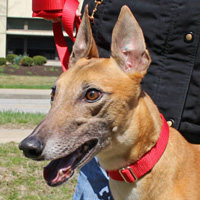 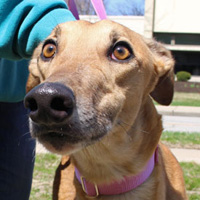 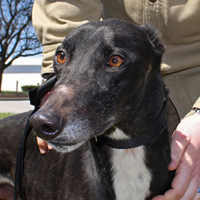 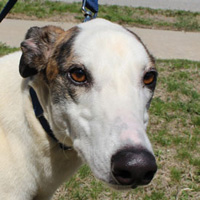 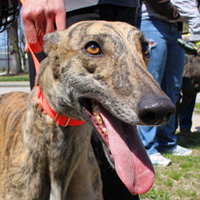